Are we going to eat today? 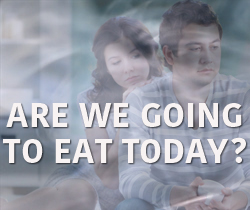 I decided to write this blog with a little hesitation & a lot of certainty that God wanted me to share this. The hesitation was due to having to be very vulnerable & sharing something that was quite against our culture & human pride. The certainty was knowing that some where out there someone was in the middle of the situation we found ourselves in back in 2009-2011. Also knowing that it might help those who have never been there know why our Christmas Campaign is so close to our heart. As this involves us being very open about part of our life I also asked Rich if it was OK. So here goes…

A number of years ago my husband, Richard became very sick. What started as a pain in his shoulder preventing him sleep ,which no one knew the reason for,very quickly turned into a debilitating illness that not only changed him physically but also emotionally and even mentally. Day after day I watched my husband get sicker & sicker, losing more control over his body & his ability to do the simplest things. He soon was unable to work & could barely leave the house due to the physical limitation with the sickness, we now know is Multiple Sclerosis, which ate more & more of his life away. Being a man who since becoming a Christian had always worked a full time job, done over time & been extremely involved in ministry & the life of the local church & much charity work it wasn’t long before disappointment & frustration seemed to take up residence in our life. Due to our finances taking a huge hit with Rich being too sick to work we began to struggle to the extreme of being unable to meet the cost of house hold bills which had never before been a problem. I began working as much as I could, I’d been a Duty Manager of a centre caring for teenagers in care but due to the restrictions 16 hour shifts were putting on my ability to look after Rich I had to leave. Soon I was working jobs assisting in kitchens during the day & cleaning at night with a few hours in between to see to Rich. But things couldn’t continue as Rich grew sicker & sicker, I had to leave all work to care for him full time. As we had no wages coming in we ended up trying to make cut backs where ever we could but we ended up having to sell many things just to get by, we even lost our car. The things that we had no problem paying for when we were in work were suddenly beyond our means.

I have to be honest with you I’m finding being this truthful extremely hard.

We found ourselves in such a desperate place we had to empty the copper jar in the kitchen to put electric credit on the meter. As a man I know Rich found this all so hard, I remember him in tears telling me, ‘a man should provide for his family, I’m sorry.’ The truth is he had nothing to say sorry for, it wasn’t his fault that he had become unwell, that sickness had turned our lives inside out. I remember many mornings waking up & we would say to one another ‘are we going to eat today?’. I couldn’t believe that we lived in the UK and this was happening to us. I would think does this actually happen in our nation? We had fed people in Africa, raised thousands of pounds over the years for that work but this was happening to us, in our nation. I remember one day an elderly couple asked me to set up some new gadget in their home, I helped them & they took us out for dinner to say thank you. They didn’t know our situation, in fact no one did, but their small act of kindness meant we ate that day. Another day a friend turned up with a few bags of shopping. As I opened them & saw they had even bought dog food for our dogs I could have cried. I looked at her knowing she had no idea what was going on. She said, ‘I just wanted to bless you.’

I know some of our friends will be surprised reading this because no one really knew what was going on or how hard things were, it wasn’t just pride why we didn’t tell them but also we felt ashamed. Not only were we Christian but we were Ministers, we had been ministering with RBB for a number of years. I think we also felt people may not understand & they may think we were failures or had been bad stewards of our money, when in fact we hadn’t. Our lives just got hit by something unexpected, sickness had completely changed our lives. We will never under estimate how drastically a situation can change someone’s life. It has taken us a number of years to financially & even emotionally recover but we thank God that in the midst of that most difficult time He never left us & that nothing is wasted. That time has changed our thinking, we never knew people struggled to eat in our nation in this day & age but we now know they do. Since this there have been times we have just felt a prompting to drop off a few bags of shopping here & there, it’s true when the Bible speaks of the still, small voice. I think our experience has actually caused our hearts to change, to become softer & for us to become more open to the prompting of God in this area. To prompt just means to encourage, we have to actively choose to follow through with action. See this is why we felt to focus on the UK with this year’s Christmas Campaign. Usually we support projects in Africa which do great work but we felt to help local people because, yes, people really do wake up in the morning thinking ‘Are we going to eat today?’ Think about it, if you suddenly became sick or lost your job, could you keep your home, your car or buy your usual grocery shop? I’m not trying to persuade you to give to our campaign, I’m just simply telling you a first hand account from a couple not many would ever believe went through a time of being unable to eat. We just want you to understand why this is close to our heart. Whether you choose to support our campaign or just simply take a loaf of bread or a pint of milk to someone in need, know that you have made a difference. Because of you someone will eat today.

You can read more about our Christmas Campaign by clicking here or to donate please use the button below. Thank you.

One thought on “Are we going to eat today?”