The Noose or The Nails – Kyle Winkler 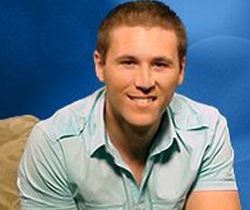 This months guest blog is from Kyle Winkler. Kyle is the founder of Kyle Winkler Ministries; a media ministry with broadcasts airing on the Christian Television Network in North Florida and viewed by more than 50,000 people online. Through video, writing and live events, Kyle’s passion is to encourage people to experience and enjoy God in everyday life. To have a deeper, more intimate relationship with God — not settling for casual and powerless faith.

The Noose or the Nails?

I’ll never forget that January morning. It was the day after I filmed a two-part interview series about spiritual warfare. The morning began routinely: Awaking at 4:30AM to be at the gym by 5. While at the gym, however, something shifted. Unexpectedly, I became keenly aware of every sin since my salvation at 16 years old. I grew strangely quiet and obviously bothered as condemning thoughts and guilt began to flood my soul. Suddenly, I felt so unqualified to serve the Lord in ministry.

The next morning grew worse. I awoke to whispers: “Look at the things you’ve done!” “God can’t use you.” My mind was the battlefield in a severe demonic war, and for the next week, voices insisted, “Shut it all down!”

Possibly worse than the sins of betraying the Son of God were the guilt and shame being heaped upon me. This must have been what Judas Iscariot felt. Every accusation intended to lure me down a road, like Judas, to be hung by the ropes of my faults. Sure, perhaps it wouldn’t be a physical death, but the death of my vision, my dream and my calling. Satan attempted to use my record of wrongs to kill my destiny.

Not coincidentally, there on my kitchen table was a resource to review for my next television interview. In it described a road that I had never traveled personally—the via dolorosa—the way of the cross. At the end of this road, too, was death, but with the promise of new life. And so I continued onward.

Charles Spurgeon once remarked that the greatest sermon ever preached included the words of John the Baptist: “Behold the Lamb of God who takes away the sin of the world” (John 1:29). I had known Jesus as the savior from my sins for many years, but  never so intimately. Admittedly, I never truly beheld, gazed at, looked or stared intently upon Jesus the Lamb sacrificed for my iniquities. As I progressed to the cross, I saw, so vividly, His flesh as it was ripped from His bones. I peered into His yearning eyes and observed His innocent blood pour from the crown in His head to the nails in His feet.

I doubled over onto the floor of my room, tears soaking my pillow, and I felt the pain of the crucifixion that I deserved. When I got up off the floor, I listed on paper my most private struggles and grievous sins, the ones I had never truly dealt with. Each accusation that Satan launched, I nailed there at the cross. And for the next 10 minutes, again and again I wrote, “blood” and retraced a cross. Upon ripping the paper to shreds, God’s Spirit whispered to mine: “It’s all been taken care of.”

My story is one to which so many today can closely relate. God desires to use this generation in ways not seen in recent history, but perceiving this, Satan has upped the ante. He’s filled the culture with so much ungodliness, leading people into guilt and shame, only to torment with whispers: “Look at what you’ve done!” “Who are you?” His plan—like it was for Judas, like he tried with me—is to lead you down a road to perish from the very ropes he bound you with.

But Satan’s accusations don’t have to destroy you. Like He did for me, God will use those same wounds to lead you to the cross of Christ—the place where your record of wrongs is nailed. It’s there where Satan’s lies are silenced. At the cross, you turn the tables on him and may taunt, “Take that, devil! I will use the very wounds you intended for my destruction in order to bring others to the wounded Son.” This is what Paul meant when he boasted that, at the cross, Satan and his minions are disqualified and “marched naked through the streets” (Colossians 2:15 MSG). This is the place where God turns the bad into good (Romans 8:28).

When you’re brought to the crossroads of defeat, the choice is yours: the road to the noose or to the nails; to be hung or to be held. Either way, you will die, but only one promises the testimony of being lost, but now found—rescued from darkness and transferred into the kingdom of Jesus (Colossians 1:13). Go now to “behold the Lamb who was slain.” Victory!

You can read more from Kyle on his website www.kylewinkler.org